Two can play at that game!

The leftwing zealots' obsession with the Cameron poster has even outweighed my Keeley Hawes fixation (Mmn....yes Bolly!) but enough's enough. It's my turn commies! 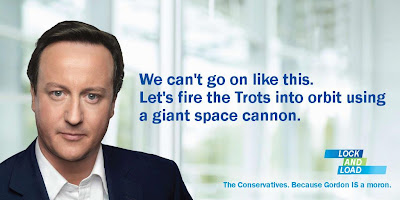 And yes, this is clear evidence I've spent too much time lurking on political betting.com
Posted by Rob at 14:06 2 comments:

There's no debate over who would win the debates.

I've just watched Cameron's interview on the Andrew Marr show and the stark contrast between the Leaders is blatant. Marr tried to be stronger than he was against Brown and was repeatedly looking to catch Cameron out but got nothing. But not through a lack of answering. 'Dave' answered each question directly and supplemented each answer with the reasoning behind it. The things I most took from the interview was

* No unfunded tax-breaks (And with the economy in this state, that's understandable)
* Cutting government spending should not affect Private Sector growth (Another Brown lie nailed)
* Ashcroft. Cameron wants every MP and peer to be legally required to pay tax in the UK. If the government wats to do this, he will assist them in rushing it through parliament. If they don't, the conservatives will after the GE. He's told Ashcroft. Ashcroft happy to agree. Cameron's killed this one stone dead. (Wish someone at CCHQ had done it sooner though!)
* He does want to reduce the defecit faster than Labours 1/2 in 4 years)
* Small businesses and entrepeneurs to be given a boost through a slashing of beauraucratic redtape that hampers them from starting up quickly.
* Europe. He wants to reclaim back some powers from Brussels. If they want to fight over it, they'll get one.
* Immigration. A real cap on immigration levels each year based on the country's requirements.
* Airbrushgate. Mrs Cameron wants a refund!

How anyone in the Labour Party thinks Gordon is going to out-debate him is beyond me. Brown won't be able to rely on parliamentary procedure and Smeagol's acquiescence there. Cameron will nail his lies and if Clegg has any sense so will he.
Stick that in your pipe and smoke it, Tennant.
Posted by Rob at 10:10 2 comments:

Labour wars : The Rebels Strike Back!

It's petered out, though strangely many of the cabinet took their time in drafting the weakest messages of support in the history of the English language.

And 'Toenails' Robinson has really put the cat amongst the pigeons by naming the six cabinet ministers prepared to walk 'in the right circumstances'. This story now ha legs. Was Robinson's nose put out of joint by the blogosphere catching him with his pants down again and decided to justify his status? His BBC masters will not be amused. The rest of us are delighted though!
Posted by Rob at 12:52 No comments: