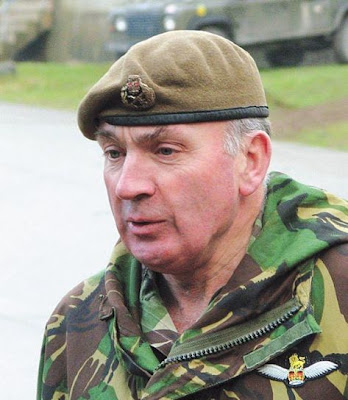 First off, a big hat-tip to Ollie Cromwell at the Red Rag for bringing this to my attention.

As many of you will be aware, several Labour figures have been attempting to smear the head of the british armed forces General Sir Richard Dannatt because of his criticisms of the MOD's support to our troops. Their latest effort was to try and dig up some dirt on his expenses, just days before his retirement. Now, the good general is understandably miffed and, displaying the combined tactical nous of Julius Ceasar, Oddyseus and Uncle Bob (à la the Total War series of games) he has pulled a veritable flanker, publishing his expenses online and spiking our defence ministers' guns as reported in THIS article in the Telegraph. His expenses were about £5000 a year which considering part of his role involves entertaining foreign dignitaries and diplomats is remarkable. The man even shops at Lidl's for these things for christ's sake (Not that there's anything wrong with Lidl's, better fruit and veg than any of the major supermarkets and they sell Lobster at a fantastic price!).

Sir Richard is now just days from retirement after 38 years of serving this country in several theatres of war yet our government sees fit to try and sully his flawless reputation. But here's the thing, we the british public truly love our soldiers. They get sent into harms way, in the most dangerous environments of war, often under-equipped and under-manned though always with the best training in the world. We know this, they know this and yet the soldiers go anyway. Even if the country does not support the war, we back our troops unfailingly (Witness the dignified way the town of Wootton Bassett line the streets of the funeral processions for our soldiers several times a week). What General Dannatt has had the temerity to do is be honest with the public and ask the Mod for the equipment and manpower needed to do the job. So what have labour done, well, what they do best of course they've attacked and attempted to smear him. They are acting like sub-human scum. I have drafted off a letter to my MP, a junior foreign office minister explaining my feelings towards the defence secretary and his staff for their reprehensible actions.

I wonder if the General has considered a role in politics now his military career is over. Perhaps he could run against smearer inc chief Kevan Jones. I'm sure the other two major parties would give him a free run against the mendacious little shit or failing that, put the two together in alocked room for twenty minutes as a leaving present for Sir Richard.

Unlike the present government, this blog supports our troops!
Posted by Rob at 11:05